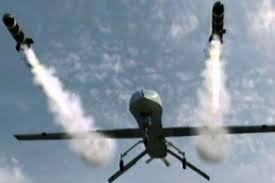 The Somali army said the U.S. carried out an air strike on a southern Somalia town where a resident said Islamist-militant fighters from the al-Shabaab group are active.

The town of Kuunyo-Barrow, about 330 kilometers (205 miles) southwest of the capital, Mogadishu, was rocked by two explosions in the early hours of Wednesday morning, Sharifo Enow, a resident, said in a phone interview. One blast occured at a gas station used by militants, and another on the outskirts of town, he said.

“We believe that a U.S. air strike hit al-Shabaab targets in Kuunyo-Barrow,” Lieutenant-Colonel Mohamed Nur Hiirey said in a phone interview from the nearby town of Barawe. “We do not know exactly who was targeted in the attack. Further details are sketchy because the area is controlled by the militants.”

The U.S. has carried out several drone strikes in Somalia since last year to help the government combat the al-Qaeda-linked al-Shabaab group. A raid in September 2014 killed the group’s former leader, Ahmed Abdi Godane. The U.S. declared al-Shabaab a terrorist organization in 2008.