You are here: Home / MidEastGulf / U.A.E. deploys secret colombian mercenary army to Yemen to fight in proxy war against Iran 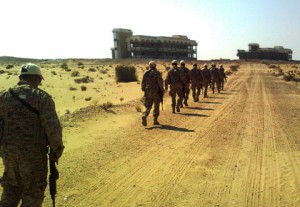 The United Arab Emirates has begun to deploy its secret army of Colombian mercenaries, assembled in the desert over the past five years (initially under the tacit direction of Blackwater founder Erik Prince), to Yemen, where it is fighting a proxy war with Iran.

Altogether, the New York Times reports, some 1,800 Latin American soldiers are stationed at an Emirati military camp called Zayed Military City. Of those, 450 troops—mostly Colombian, but also Panamanian, Salvadoran, and Chilean—have been deployed to Yemen, which fractured into a brutal civil war prodded along by Iran, the United States, Saudi Arabia, and the U.A.E. earlier this year.

According to the Times, we can expect to see more of this sort of thing:

It is also a glimpse into the future of war. Wealthy Arab nations, particularly Saudi Arabia, Qatar and the Emirates, have in recent years embraced a more aggressive military strategy throughout the Middle East, trying to rein in the chaos unleashed by the Arab revolutions that began in late 2010. But these countries wade into the new conflicts — whether in Yemen, Syria or Libya — with militaries that are unused to sustained warfare and populations with generally little interest in military service.

“Mercenaries are an attractive option for rich countries who wish to wage war yet whose citizens may not want to fight,” said Sean McFate, a senior fellow at the Atlantic Council and author of “The Modern Mercenary.”

“The private military industry is global now,” said Mr. McFate, adding that the United States essentially “legitimized” the industry with its heavy reliance on contractors in Iraq and Afghanistan over more than a decade of war. “Latin American mercenaries are a sign of what’s to come,” he said.

Not only is the deployment of the Emirati-employed mercenaries to Yemen supposed to be a secret, the Times reports, but their presence in the U.A.E. itself has never even been officially acknowledged.

In their 2011 story that broke the news of the mercenary army’s formation, Times reporters Emily Hager and Mark Mazzetti wrote:

Knowing that his ventures are magnets for controversy, Mr. Prince has masked his involvement with the mercenary battalion. His name is not included on contracts and most other corporate documents, and company insiders have at times tried to hide his identity by referring to him by the code name “Kingfish.” But three former employees, speaking on the condition of anonymity because of confidentiality agreements, and two people involved in security contracting described Mr. Prince’s central role.

The former employees said that in recruiting the Colombians and others from halfway around the world, Mr. Prince’s subordinates were following his strict rule: hire no Muslims.

Muslim soldiers, Mr. Prince warned, could not be counted on to kill fellow Muslims.