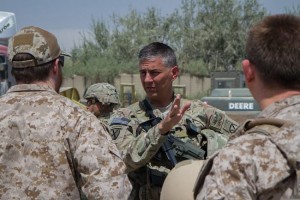 A clear defeat of Islamic State militants in Iraq and Syria could require to more years of strenuous fighting, according to the commander of the US-led Global Coalition to Counter ISIL.

Lt. Gen. Stephen Townsend said, in an interview with The Daily Beast, published Monday, that the fight against the extremist group in both countries would could need two more years.

Predictions regarding the end of the Mosul battle have varied among Iraqi and international coalition commanders. Iraqi Prime Minister Haider al-Abadi had recently voiced confidence that the battle could end before year’s end. His optimism has occasionally find echoes at statements by several local officials.

On Sunday, Fadel Barwari, a commander of the Golden Division, an elite Iraqi security force involved in the operations, said in a press interview, however, that the battle for Mosul could need two months to end.

The US-led coalition is backing Iraqi government forces and paramilitary groups in their major campaign against IS in the city of Mosul, an operation that has entered its third month. Iraqi and US commanders had estimated the number of militants killed by nearly 4000 since the launch of the campaign for Mosul in October.

The extremist group, however, has exhibited fierce resistance in its fight against the advancing forces whose commander say they became in control over 40 districts in the eastern section of the city. IS reliance on a network of underground tunnels, booby-traps, suicide attackers and barracking among densely-populated areas ha slowed down operations progress over the last few days, prompting Iraqi forces to take a recess for refit.

“Iraqi forces had indeed paused in their charge into Mosul over the past week or so, 60 days into their campaign, to take stock and resupply, with casualties in some units as high as 30 percent. It’s something U.S. advisers had warned them they might have to do,” the website quoted Townsend as saying.

“People need to rest. They need to assess how things are going because they are not going as fast as we thought,” he said.