You are here: Home / Africa / Two years of South Sudan war with peace on paper only 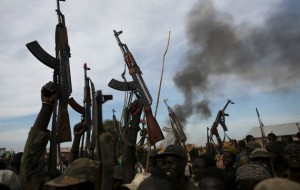 Two years later, over 185,000 people are sheltering inside UN camps across the country, still too frightened to leave.

“There is no freedom,” said Bong Kubuong, 39, a father to three and one of 27,000 people living inside two camps in Juba, miserable but safe from a war marked by atrocities, including ethnic massacres, gang rape and even accusations of forced cannibalism.

“We stay here with hope that one day things will change,” he said, describing how he spends days walking in circles around the camp fence. “You can stroll around within the camp parameter but without getting out because you can be killed.”

In Juba, many of those in the camps are from the country’s second biggest ethnic group, the Nuer, who were among the first to be targeted as troops loyal to President Salva Kiir, a Dinka, fought it out with those allied to his ousted deputy, Riek Machar, a Nuer.

“They were looking from door to door and when they found you are a Nuer, they’d kill you,” said Deng Diang Chuol, sitting in the crowded camp in Juba, remembering how the war began on December 15, 2013.

Officially there is peace after an August deal — at least the eighth ceasefire agreed. But fighting continues, including active recruitment of armies of child soldiers.

UN Secretary-General Ban Ki-moon last month warned that the broken ceasefire and failure to meet deadlines cast doubt on the parties’ “commitment to the peace process”.

Both sides are accused of having perpetrated ethnic massacres, recruited and killed children and carried out widespread rape, torture and forced displacement of populations to “cleanse” areas of their opponents.

“By this time we expected to be out of the camp… but we are not going out because we are still fearing. We fear that there is no security for us still,” said Chuol, aged 37, who lives in the Juba camp with his young son.

The army and rebels have repeatedly accused each other of breaking an internationally-brokered August 26 ceasefire, and the key deadline last month for rebel chief Machar to return to Juba was missed.

“What has been put down on paper can only be a reality when leaders show the political will to implement the deal and stop subjecting innocent South Sudanese to suffering,” said Edmund Yakani, civil society activist in Juba.

Some estimate that 50,000 have been killed, including reports of children tossed into fires, but no death toll has been kept.

Civil war began on December 15, 2013, when Kiir accused Machar of planning a coup, setting off a cycle of retaliatory killings that have split the poverty-stricken country along ethnic lines.

But an African Union report — which listed a string of abuses, including forced cannibalism and dismemberment — gave little credence to Kiir’s claim that the civil war was a coup plot, and included testimony that the ethnic violence in Juba had been prepared in advance.

The conflict has triggered a humanitarian crisis with 2.3 million people forced from their homes and 4.6 million in need of emergency food. Tens of thousands are dead and the economy is in ruins.

While an official famine has not been declared, UN-backed experts warn that thousands are dying of starvation in the country’s war zones, and aid agencies say they cannot access areas to stave off famine.

“Four months after the peace deal’s signing, little has changed… lives have been shattered, leaving many with little or nothing to survive on,” Oxfam country chief Zlatko Gegic said.

The International Committee of the Red Cross calls the hunger crisis “alarming” and the situation in the country “chaotic and dangerous”.

Human Rights Watch warned Tuesday the conflict “has become increasingly fractured” adding that, “despite the peace deal it is likely that violence and fighting between groups will continue.”