You are here: Home / Europe / Two Syrian terror suspects are arrested in Geneva for ‘making and transporting explosives and toxic gases’ amid fears of an ISIS terror attack 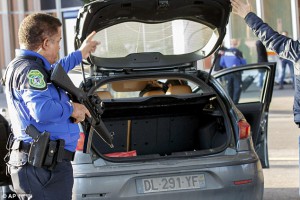 Two people of Syrian origin had been arrested in Geneva on suspicion of transporting ‘explosives and toxic gases’ as part of a probe into a terror threat.

The two suspects are accused of the ‘manufacture, concealment and transport of explosives and toxic gases’, the federal prosecutor’s office said in a statement.

They are also under suspicion of violating Swiss law prohibiting ‘groups like Al-Qaeda, Islamic State and similar organisations’, it added.

Both men were arrested in the Geneva region yesterday with police confirming they found traces of explosives inside the car.

The western city has remained on high alert due to an increased jihadist threat in Switzerland, with added security personnel making careful chats on vehicles.

Geneva’s public prosecutor has announced a news conference for later today with no confirmation yet of the chemicals found in the car.

The Geneva region raised its alert level to three on a five-point scale on Thursday following fears of a potential terror attack.

Armed police were deployed at sensitive locations across the city, which is home to the UN’s European headquarters.

Swiss President Simonetta Sommaruga revealed yesterday that a ‘foreign authority’ had handed over intelligence information to Swiss intelligence about ‘a potential IS cell in the Geneva area’.

The news comes after it was revealed yesterday that Geneva police were searching for four suspects in relation to the deadly Paris attacks on 13 November.

Geneva is almost entirely enclosed by France, a country still reeling from the jihadist attacks that left 130 people dead in Paris last month.