You are here: Home / Mediterranean / Two Sinai IS fighters killed in battle with Egyptian forces

Frequency of attacks rising as jihadists return from fighting in Syria, Libya… 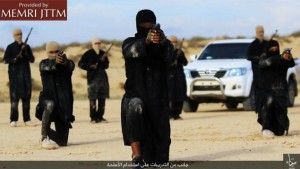 Two Islamic State fighters were killed in the northern Sinai overnight Thursday, according to reports. The men were killed in a firefight with Egyptian security forces operating in the Rafah area, near Egypt’s border with Gaza, Israel Radio reported.

According to the London-based Arabic daily al-Hayat, the growing frequency of jihadist attacks in Sinai is caused by the return of Egyptian fighters who had gone to Syria and Libya to fight in the ranks of the Islamic State’s forces there.

Egyptian President Abdel-Fattah el-Sissi said in comments published on Saturday that his country’s war against Islamic militants in the Sinai Peninsula would be long, but that conditions in the vast and arid region were improving.

In an interview with Egypt’s three state-owned newspapers, he acknowledged that both the militants and government forces were getting better at fighting each other in the strategic area bordering Israel and the Hamas-ruled Gaza Strip.

“Conditions in Sinai are improving and (our) efforts are continuing because the war is long,” said el-Sissi, whose comments came one day after Islamic State militants attacked an army checkpoint in Sinai, killing 12 soldiers and wounding at least six more.

“The terrorists are evolving and we are improving our operations,” he said.

IS claimed responsibility for the attack in a statement Saturday, saying its fighters killed 20 “apostates” and seized all weapons at the checkpoint, located about 80 kilometers (50 miles) east of the Suez Canal, near the town of Bir el-Abd.

The Egyptian military said Friday that troops killed 15 militants in a gun battle at the checkpoint. The IS statement said its fighters had “returned safely” to their base.

Journalists have had virtually no access to northern Sinai in recent years.