You are here: Home / Europe / Two people stabbed in another Islamist terrorist attack in UK 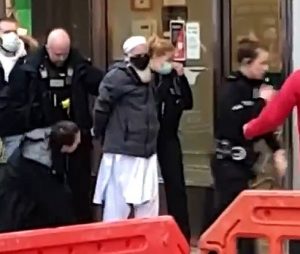 A 57-year-old man was detained by Lancashire police after violently attacking two women and stabbing them with the knife in the city of Burnley in northern England. According to the reports, the attack appeared to be random and unprovoked, like reported by eturbonews.com.

The police reported that they were called to an incident at 9:30am local time after two women were stabbed in a Burnley city branch of popular department store Marks & Spencer.

The two victims were taken to hospital with serious injuries, but the wounds are not thought to be life-threatening, according to a police statement. Investigators confirmed that a knife had been recovered.

Local reports suggest that members of the public managed to apprehend the 57-year-old attacker before the police arrived at the scene.

Photos and videos have emerged online showing the moment the police arrested the attacker. The man, who according to the police is from the local area and aged 57, appears calm as he is handcuffed by officers outside the store.

The man’s clothing led many on social media to deduce that he is a follower of Islam and to suggest the attack was religiously motivated; however, police have not confirmed any motive for the stabbings.

The attack comes as England reopened on Wednesday after a month-long COVID-19 lockdown and in time for the Christmas shopping rush.

In November, the UK’s terrorism threat level was raised from “substantial” to“severe” as a “precautionary measure” following a number of terrorist attacks in France and Austria.