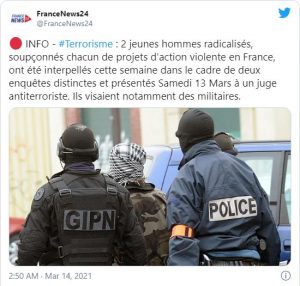 Judicial sources revealed Saturday that the two youths, aged 17 and 18 respectively, were arrested and charged by a Paris court for “criminal terrorist association” and remanded in custody.

In what are two separate cases, the 17-year-old suspect was reportedly arrested on Wednesday by French Internal Security agents (DGSI) in Mantes-la-Jolie, located in the outer suburbs north west of Paris and taken into police custody.

The minor, who had been using the encrypted Telegram Messenger platform, had expressed his intention to attack the military.

This he said was to “make France pay” for its involvement in the coalition fighting against the Islamic State.

The second suspect was also arrested by the DGSI on Wednesday, but in the southern city of Marseille. His arrest followed a raid on his home by the authorities, where terrorist propaganda was seized.

According to sources close to the case, the young man of Franco-Algerian origin had initially planned to travel to fight in Iraq and Syria but had abandoned the idea, focusing on committing terrorist acts on French territory.

She pointed to a “an atmosphere of terrorism”, involving “young people who were not necessarily contacted directly by terror organisations such as Al-Qaeda, but who became radicalised by using their mobile phones and looking at social media content and deciding by themselves to carry out a terrorist act.”