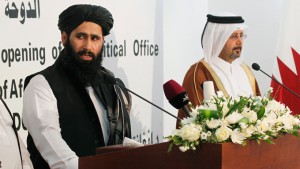 After the resignation of Sayed Mohammad Tayyeb Agha from the political office of Taliban in Qatar two more top negotiators from the same office have reportedly resigned.

The two have been identified as Aziz Rahman and Maulawi Nik Mohammad, who was a deputy minister during Taliban regime.

The turmoil within the leadership of Taliban occurred after the group’s supreme leader Mullah Mohammad Omar was announced dead recently.

Although, Mullah Omar’s death was many times reported in the past but those reports were turned down by Taliban spokesmen.

Recently when Fidai Mahaz, a splinter group of Taliban, revealed that Mullah Omar has died, Taliban for the first time confirmed the report and that was the beginning of a crack within the Taliban leadership as the death was kept secret for years.

The turmoil was further fuelled with the appointment of Mullah Akhtar Mohammad Mansoor as the new supreme leader.

Taliban’s leadership has been reportedly divided into two groups, one that has pledged allegiance to the new supreme leader and another that opposes him wants Mullah Mohammad Yaqoub, the eldest son of Mullah Mohammad Omar, as his father’s successor.

Both the rival parties are now reportedly consulting other Taliban leaders to find a solution to the chaos.