You are here: Home / Africa / Two Malian soldiers killed at checkpoint in Timbuktu 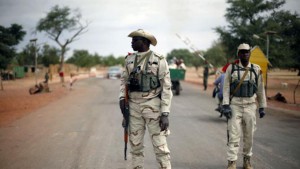 Two Malian soldiers were killed when unidentified gunmen attacked a checkpoint on the outskirts of Timbuktu, military sources said, fuelling concern at simmering violence following a breakdown in a peace accord.

“The attack by armed men took place at 3 a.m. this morning at a checkpoint on the exit from Timbuktu toward Taoudenit,” said army spokesman Colonel Souleymane Maiga. “There are two dead.”

A U.N.-backed peace deal signed in June between the government and rival armed groups has unravelled in recent weeks after pro-government militia drove northward into territory held by Tuareg separatist rebels.

The militia agreed last week to withdraw from the town of Anefis but has yet to do so, fuelling tensions with the separatist Coordination of Azawad Movements (CMA).

Villagers in the Timbuktu region said CMA fighters pillaged the town of Echelle and forced inhabitants in the village of Acharane to chant slogans in favour of independence for Azawad, the name they give to northern Mali.

Residents of Timbuktu said the the presence of armed men was reported 10 km from the town over the weekend. They voiced frustration against the U.N. peacekeeping mission (MINUSMA) for not intervening.