You are here: Home / Mediterranean / Two killed in rocket strike in Libya’s Benghazi 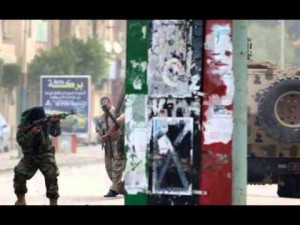 Two people were killed when a rocket hit a residential building in the Libyan city of Benghazi on Thursday, bringing the death toll from recent fighting to at least 53 people in the past five weeks, medics said.

Forces loyal to Libya’s internationally recognised government have been fighting Islamist groups in the eastern port city, part of a wider struggle in the four years since Muammar Gaddafi was overthrown and killed.

On Thursday, a rocket hit a residential building, killing two civilians and wounding around four, a hospital medic said. Around 17 civilians have been killed and 90 wounded in artillery and rocket strikes since the start of April.

Another 36 soldiers and armed youth were killed and around 270 wounded in street fighting between pro-government and Islamist forces since April, army and medical sources said.

Mohamed El Hejazi, an army spokesman, said the Islamists were firing the rockets whenever his forces approached their strongholds. The Islamist camp denies this.

The battle eptiomises the chaos in Libya, where armed groups back two governments vying for control. The official prime minister has been based in the east since the capital, Tripoli, was seized by a rival group that set up its own government. Only the eastern government is internationally recognised.

Both sides command loose coalitions of former anti-Gaddafi rebels. After Gaddafi’s ouster in 2011, the various factions split along political, regional and tribal lines.

The Tripoli government backs the Majlis al-Shura umbrella group to which Ansar al-Sharia belongs. That was the group blamed by Washington for a 2012 assault on its diplomatic mission in Benghazi that killed the U.S. ambassador.