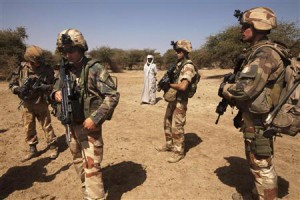 French special forces have killed two jihadist leaders in Mali, including the commander who claimed the execution of two Radio France Internationale journalists in the remote northern town of Kidal in 2013.

The French defence ministry says four jihadists were killed in a raid on Monday night including “two of the main leaders” of Al-Qaeda in the Islamic Maghreb and Ansar Dine.

The terrorist chiefs are Ibrahim Ag Inawalen, who used the alias “Bana”, and Amada Ag Hama, known as Abdelkrim al-Targui, who claimed he ordered gunmen to abduct and murder journalists Ghislaine Dupont, 57, and Claude Verlon, 55, while they were covering the run-up to legislative elections in the country.

The radio station’s parent company, France Medias Monde, said in a statement late Wednesday that it “expects that the ongoing judicial inquiry into the assassination of its two reporters will explain the circumstances of the tragedy and lead to the arrest of the assassins to stand trial.”

Targui’s unit is believed to be linked to the kidnappings of other French nationals, including engineer Michel Germaneau, who was kidnapped in April 2010 in northern Niger, and Serge Lazarevic and Philippe Verdon, who had travelled to Mali to do a feasibility study for a new mine.

France’s defence ministry said that the operation this week was “a fresh blow to armed terrorist groups in the Sahel” after the French army killed Ahmed el Tilemsi, the leader of the Al-Murabitoun group in Mali, in December.

The announcement of the French raid came as a militant opened fire on a United Nations residence in the Malian capital Bamako Wednesday. The UN’s mission there said a civilian guard had been shot and wounded but no troops were hurt.

Despite peaceful elections after a French-led international intervention wrestled northern Mali from jihadist control, the country remains deeply divided and the north continues to be plagued by violence. France has kept 1,000 troops in the region since Operation Serval ended as part of a wider counter-terrorism operation.