You are here: Home / MidEastGulf / Two Iranian officers fighting with Houthis captured in Yemen by loyalist 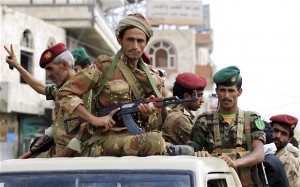 The captives, who hold the ranks of colonel and captain, were reportedly detained in two separate parts of Aden, which is at the centre of fighting between pro-Hadi militiamen and the Houthis, according to the report.

Al Arabiya posted a photo of what it said was one of the alleged officers, without saying when either he or his countryman had been captured.

The purported detention comes amid escalating tensions between Saudi Arabia and its regional rival, Iran, about Yemen.

Saudi Arabia and eight Sunni fellow Arab countries are engaged in an air campaign in Yemen against the Shiite Houthis, widely understood to be backed by Shiite Iran.

Tehran has condemned the Saudi-led intervention, but denied claims it is aiding the Houthis, who last month forced Hadi to flee to Saudi Arabia.

A demonstration outside the Saudi Arabian embassy in Tehran turned violent on Saturday as hundreds of protesters clashed with police.

The demonstrators, mostly Iranian students, were trying to attack the embassy and remove the Saudi flag. As they moved on the embassy, many shouted: “The embassy must be closed” and “Get out of our country.”

The protest seems to be linked to an incident last week in which two teenaged Iranian pilgrims at the Jeddah airport in Saudi Arabia were allegedly sexually molested by Saudi security workers.

The two Saudi personnel have been detained, but it remains unclear if they will face charges or be punished.

Earlier this week, the Iranian Foreign Ministry summoned the Saudi charge d’affaires in Tehran in relation to the incident and demanded Saudi Arabia severely punish the two suspects, according to Iranian media.

Iranian law calls for the death penalty for sexual abuse, which is what the demonstrators at the embassy were demanding.

Saudi Arabian authorities are mulling tougher penalties against sexual harassment to deter a surge in the offence in the ultra-conservative monarchy.

The Shura Council – Saudi Arabia’s parliament- is now working on a draft law, which makes sexual harassment punishable by up to five years in prison, according to local media.