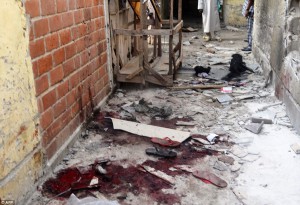 Military sources had said earlier that they suspected the bombers’ target was a nearby mosque in Fotokol.

The first bomb went off during a security check and it was unclear if the second bomber had detonated her bomb or whether she had been killed first by Cameroonian forces.

Boko Haram wants to establish an Islamist state in northeastern Nigeria and has waged a six-year campaign of violence to that end, killing thousands of people and displacing two million others.

Neighbouring countries, including Cameroon, joined forces against the group last year, as its offensive spread beyond Nigeria’s borders.