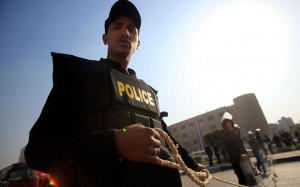 Two Egyptian police recruits were killed when unidentified gunmen shot them outside the gate of a security forces camp in the volatile Northern Sinai region, security sources said.

Last month, Egypt extended by three months a state of emergency imposed on Northern Sinai in October after Islamist militants stepped up attacks in the remote but strategic peninsula bordering Israel, Gaza and the Suez Canal.

On Thursday, gunmen in a car shot dead the two policemen who were guarding the gate of a police camp in the city of Rafah, the sources said.

Security forces responded with gunfire but the attackers fled the scene, they added.

No one has yet claimed responsibility for Thursday’s attack.

Sinai Province, an affiliate of Islamic State, which earlier changed its name from Ansar Bayt al-Maqdis, is the most active militant group in the Sinai and aims to topple the government in Cairo. (Reporting by Yousri Mohamed in Ismailia; Writing by Mahmoud Mourad; Editing by Toby Chopra)