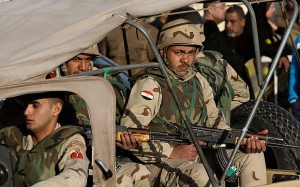 Egyptian security officials say an army officer and a conscript have been killed and five soldiers injured when their armoured vehicle was hit by a roadside bomb in the northern part of Egypt’s Sinai peninsula.

The officials, who spoke under condition of anonymity because they were not authorised to speak to reporters, said the explosion took place Monday morning in the Taweel Al Amir area south of Rafah and that the injured were taken to the military hospital in Al Arish.

Egypt has been battling an insurgency in northern Sinai for years, but attacks against the army and police have increased after the July 2013 removal of Islamist President Mohammed Morsi.

The ISIL affiliate based in Sinai has claimed a series of large-scale assaults.