You are here: Home / Europe / Two detained in Finland over ISIS executions in Tikrit 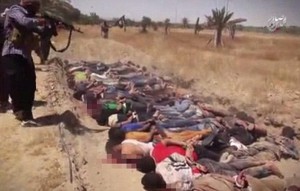 The National Bureau of Investigation says that two Iraqi men have been detained in Forssa, Finland on suspicion of terrorism-related murders committed in Iraq.

At a press conference within the past few minutes, NBI Chief Inspector Jari Räty said that the men are suspected of 11 killings on one occasion in Iraq during the summer 2014 following an ISIS attack on unarmed Iraqi Air Force cadets near Tikrit.

ISIS made propaganda videos of the killings and distributed them online.

They allegedly shot Iraqi Army cadets who had been taken prisoners and were lying on the ground, tied up. The two 23-year-old Iraqi men arrived in Finland in September. Räty declined to say whether or not the two men had made asylum applications.

They were not interviewed for the first time until today due to a shortage of interpreters. Police will seek to place them under formal arrest tomorrow.