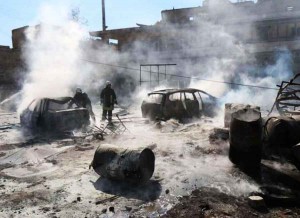 At least 23 people were killed and 40 wounded in two explosions in the Syrian city of Latakia on Tuesday, a monitoring group said, in one of the bloodiest attacks on President Bashar al-Assad’s coastal stronghold.

The blasts hit two separate areas of the city, one from rocket fire and the other either from a rocket or a planted explosive device, the Britain-based Syrian Observatory for Human Rights said.