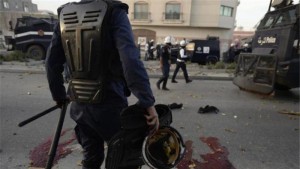 A bomb attack killed two Bahraini policemen on duty in the mainly Shiite village of Sitra, south of the capital Manama, the Interior Ministry said Tuesday, days after the government said it had disrupted an arms smuggling plot linked to Iran.

“A terrorist bombing targeted policemen on duty in the Sitra area, resulting in the deaths of two of them and seriously wounding a third,” the Interior Ministry said on its Twitter account.

It added that five more policemen had received light to moderate injuries and were being treated in hospital.

On Saturday, the government said it had foiled an arms and explosives smuggling plot by two Bahrainis with ties to Iran, and recalled its ambassador to Tehran.

Bahrain was hit in 2011 by demonstrations demanding greater democracy and more rights for Shiites, many of whom say they are subject to political and economic discrimination.