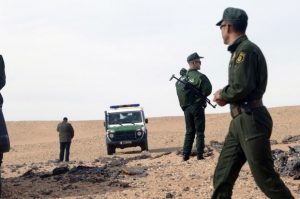 Two Algerian soldiers were killed and one was wounded on Monday following the explosion of a roadside bomb not far from the Tunisian border, reported local media according to xinhuanet.com.

Citing local security sources, TSA news website reported that two soldiers were killed in the locality of Cherchar, within the province of Khenchla.

It added that the bomb exploded when the troops convoy returned from a search operation in the area where eight terrorists were killed by army forces last month.

On February 14, five soldiers were killed and two others were seriously injured in the explosion of a roadside bomb in the town of Negrine, within the province of Tebessa, near the border with Tunisia.

Located in a region plagued by unprecedented security and political instability, Algeria faces ongoing terrorist threats, as tens of thousands of troops are deployed on eastern and southern border to thwart potential intrusion of militants.