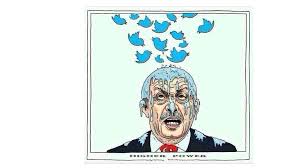 Twitter announced on Friday that it had removed 7,340 accounts tied to a Turkish state-linked information campaign aimed at increasing domestic support for President Recep Tayyip Erdogan and his ruling party, like reported by kurdistan24.net.

The campaign also reportedly targeted Kurdish parties in both Syria and Turkey, attempting to garner more support for the widely-criticized Turkish invasion of northern Syria in October 2019.

“Detected in early 2020, this network of accounts was employing coordinated inauthentic activity, which was primarily targeted at domestic audiences within Turkey,” Twitter said in a statement on Friday.

“Based on our analysis of the network’s technical indicators and account behaviors, the collection of fake and compromised accounts was being used to amplify political narratives favorable to the AK Parti (Justice and Development Party – AKP), and demonstrated strong support for President Erdogan. We’re disclosing 7,340 accounts to the archive today.”

Louis Fishman, an assistant professor at Brooklyn College, City University of New York, wrote on Twitter that the move is embarrassing for the Turkish government.

“I’ve noticed an upward swing in the ‘Ak Trolls’ and it is not like we never knew this, but really it’s just pathetic. And to think of the possibility that many were getting salaries. Really, there is not a better way to help your country?”

Twitter has shared the data with researchers at the US-based Stanford Internet Observatory. In a report, the group said the tweets were critical of the pro-Kurdish Peoples’ Democratic Party (HDP) from Turkey “and accused it of terrorism and social media ploys.”

Furthermore, “Tweets worked to increase domestic support for Turkish intervention in Syria. There were also English-language tweets that attempted to increase the external legitimacy of Turkey’s offensive in northeastern Syria in October 2019.”

The Stanford report also suggested that Turkish pro-government accounts tried to legitimatize Turkey’s October offensive in “positive terms: as a fight against terrorists, as standing with the Kurds, and as a contrast to purported YPG (People’s Protection Units) tactics of targeting civilians.”

“Several of the English-language pro-Syrian intervention hashtags (such as #TurkeyFightsISISandYPG) appear to have originated with AKP politician accounts,” the report said.

Turkey’s so-called Operation Peace Spring was widely condemned by several countries and global organizations which pointed out that the campaign destabilized the region significantly.

According to Özlem Keyhan Pusane, an associate professor at Isik University writing for War on the Rocks, “the level and scope of international disapproval about Turkey’s most recent intervention in Syria — Operation Peace Spring — surprised Turkish policymakers and the public.”

As a result, Turkey attempted to gain more support for the operation through disinformation campaigns on Twitter.

According to an October 2019 report from the Atlantic Council’s Digital Forensic Research (DFR) Lab, Turkish accounts waged the parallel hashtag campaign on Twitter #babykillerPKK after Turkish armed forces bombarded the “Kurdish militia allied with the United States in its counter-Islamic State campaign in northeastern Syria.”

The campaign referred to the outlawed Kurdistan Workers Party (PKK), a Kurdish rebel force currently engaged in a decades-long war with Ankara for broader Kurdish rights in Turkey.

Turkey considers the YPG to be the Syrian branch of the PKK, a claim the YPG denies. In turn, the YPG accuses Ankara of supporting extremist Jihadist groups such as the Islamic State and also Hayat Tahrir al-Sham (HTS), which the United States, Turkey, and Russia have all designated as terrorist groups.

The DFR report also claimed that pro-Turkish troll accounts tweeting the #BabyKillerPKK “also pushed a narrative equating the Syrian Kurds and the PKK, often referring to both simply as YPG/PKK,” and accusing them of killing civilians.

The Turkish operation according to a United Nations Commission of Inquiry on Syria report in March, however, led to mass waves of displacement, forcing more than 175,000 civilians from their homes. During the operation, civilians were also killed, including during an airstrike against a civilian convoy near Ras al-Ain (Serikaniye) in mid-0October in which 11 people were killed and 74 injured, including 19 women.