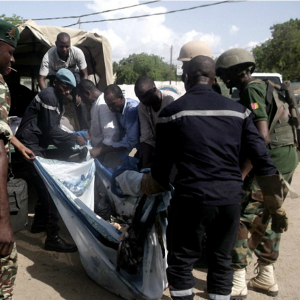 Twin suicide blasts killed at least nine people and injured 29 others on Sunday in far northern Cameroon, a region that has been repeatedly hit by Boko Haram jihadists, security and local authority sources said.
The sources said the attacks in Kangaleri village, around 30 kilometres (19 miles) from the town of Mora, were carried out by two female suicide bombers. Nine people died when the first woman detonated a bomb in a tiny milk and donut restaurant.
The second suicide bomber killed only herself, a local authority official said. Many of the injured were “very badly” hurt, added the official, who asked not to be identified. The blasts come three weeks after another twin suicide attack in Mora that left at least three people, including a police officer, dead.
They are the 14th and 15th suicide attacks attributed to Boko Haram in far northern Cameroon since July, causing more than 100 deaths.
Cameroon is involved in a regional military alliance with Chad, Niger and Nigeria, which all share Lake Chad, to fight the Islamist group that has waged a bloody insurgency since 2009 marked by mass abductions, village massacres and suicide bombings, sometimes by women and teenagers.
In Chad on Saturday, 41 people were killed and 48 wounded in triple explosions blamed on the jihadist group in Baga Sola, a Chadian city on Lake Chad, home to tens of thousands of refugees from the conflict.
While climate change has reduced the lake’s surface in recent years, it contains many islands and islets used by fishermen and its banks have dense vegetation, which makes infiltrations by Boko Haram Islamists much easier. At least 17,000 people have been killed and more than 2.5 million made homeless since the Boko Haram insurgency began.