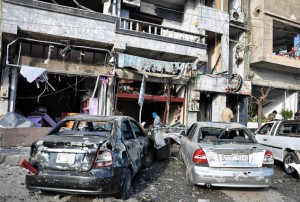 At least 12 people were killed and 40 others wounded when two explosions rocked a Shiite district protected by members of the Lebanese Shiite Hezbollah group south of the capital Damascus on Sunday, a security source told Xinhua.

The twin bombings rocked the sprawling Sayyidah Zaynab district in the southern countryside of Damascus, where a key Shiite shrine with a tomb of Zaynab, the granddaughter of Islam Prophet Muhammad, is located.

The source told Xinhua that the death toll could likely rise due to the number of critically wounded people.

The Sayyidah Zaynab tomb became a center of religious studies of the adherents of the Shiite sect of Islam and a destination of mass pilgrimage by Shiite Muslims from across the Muslim world.

On June 14, 2012, a suicide car bomb tore through that district, wounding around 14 people.

In mid-summer 2012, the district has become under frequent attacks and shelling by the ultra-radical rebels, who aim to attack the Shiite people due to their supportive stance on the Syrian government and their religious background about the Shiite-Sunni conflict.

As the district holds religious significance to the Shiite people, Hezbollah sent fighters to protect the shrine and manned checkpoints sounding it.