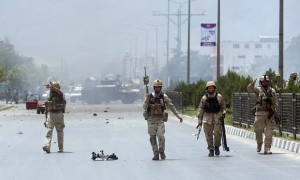 Taliban have warned attacks on 1TV and Tolo private TV channels operating from Kabul with sub offices and reporters in a number of provinces.

A statement published on Taliban website accuses the two TV channels for propagating against them.

“Tolo and 1 TV channels are spearheads among these propaganda networks tasked with promoting the intellectual, cultural and information invasion of the infidels in Afghanistan. These networks with the complete backing of the Americans ridicule our religious and cultural norms, encourage obscenity and lewdness, inject the minds of youth with dangerous substances such as irreligiousness, immorality, violence, gambling, intermixing and profanity and specifically spread propaganda filled with hate and open enmity against Jihad and Mujahideen.” The press release states.

It warns that 1TV and Tolo are now military objectives for Taliban.

“The Islamic Emirate of Afghanistan from now onwards does not recognize Tolo and 1 TV channels as media outlets but designates them as military objectives due to their disrespectful and hostile actions towards the Afghan Mujahid nation.”

“Henceforth no employee, anchor, office, news team and reporter of these TV channels holds any immunity. “ The statement adds.

“Hereafter all the reporters and associates of these channels will be deemed enemy personnel, all of their centers, offices and dispatched teams will be considered military objectives which will be directly eliminated.” The statement threatens.

“Our demand from those associating with these channels is that they stay away from their offices and reporters and to end all contacts with them. People should stop visiting the main offices and branches of these channels, cease participating in its programs and bar all its reporters from entering their homes. Intellectuals should stop partaking in its news reports and the Muslim nation should generally quit watching and strongly boycott them.” The statement warns.