You are here: Home / MidEastGulf / Turks and jihadists in ethnic cleansing of Kurds and Christians in North East Syria 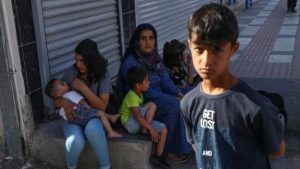 The Turkish army and the pro-jihadist militias that support the offensive launched by Ankara against the Kurds in the north-east of Syria have perpetrated a “soft” ethnic cleansing affecting members of other religious minorities including Christians, like reported by asianews.it.

International activists and NGOs report that the assurances provided by the Turkish president Recep Tayyip Erdogan to the US vice-president Mike Pence are in reality largely ignored on the ground.

Amnesty International report that the Turkish military and its Arab allies have shown “a shameful lack of respect for the lives of civilians”. The activists base their claims on the testimony of rescuers, displaced persons and journalists, according to whom “serious violations and war crimes” have taken place including “summary executions and attacks” that “killed or wounded civilians”.

Among those denouncing the abuses of the Turks and their allies is a Syrian Christian politician, responsible for the Syriac National Council. Interviewed by the Catholic News Service (Cns), Bassam Ishak speaks of intimidation and targeted attacks against Armenians and Syriac Christians, who are prevented from accessing the lands and their properties in the disputed territories of the north-east. A serious problem, explains, especially in this period of cotton harvesting, among the main sources of income.

According to Ishak, a member of the Syrian Democratic Council, the pro-Turkish militants would have the order “not to physically touch the Christians”, but are free to expropriate lands and property. Syrian armed groups allied with Ankara “are repeating what has been done in the past to Afrin”, when the Turks invaded the city of northwestern Syria in 2018 with the help of armed gangs and mercenaries.

“In Afrin – Ishak says – they took the crops of the Kurds who lived in the area and now they do the same with the Christians. Ras al-Ayn Christians own at least one third of agricultural land. These forces are conducting a sort of soft ethnic cleansing. Christians are frightened by these gangs, and end up losing their source of income “, so they ask “why should they stay and live under Islamic extremists”.

A Christian doctor of the city speaks of Turkish bombings on the night of the 24th, when the truce should have been in force, which caused “many deaths”. The following day three nurses were shot in Suluk, near Tal Abyad, by Syrian militia allied with Turkey. Their mutilated bodies have been found in the sewer system.

These events, he says, show once more truce violations and abuses committed by Ankara and its allies. Added to this is the video posted on October 21 by the so-called Islam Army that invites its members to treat Christians as “second-class citizens” and force them to pay the jizya, the Islamic tax that minorities must pay to benefit from the protection of Muslims.

As reported by the group Doctors for Human Rights, despite the agreement between Russia and Turkey on 22 October, the situation remains “very harsh” for civilians. Ankara, the activists add, must “immediately stop attacks against the civilians in Syria and respect human rights”.

However, despite the words in the area there are violations of the truce and even in the last hours there has been a return to fighting. Syrian state media reports violent clashes in the border town of Ras al Ain, where Ankara aims to have created a “safe zone”. The town is under the control of forces led by Syrian Kurds, supported by the soldiers of Bashar al-Assad who have been fighting for days with Ankara’s troops.