You are here: Home / MidEastGulf / Turkmen fighters to participate in Mosul operation to help in retaking the city from Islamic State 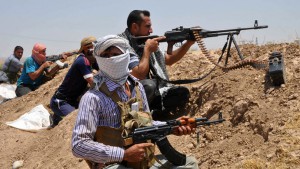 As the commander of the 16th Brigade of the largely Shia Muslim al-Hashd al-Shaabi militia, also known as the Popular Mobilization Forces, Najar is preparing his men for the expected assault to retake Mosul from Islamic State militants.

The city, Iraq’s second largest, was seized by IS militants in June last year. Following this success the extremists went on to target Turkmen towns such as Tal Afar, 60 kilometers to the west of Mosul, and Amirli, between Baghdad and Kirkuk.

“Our armed forces consist of 4,000 fighters,” Najar told Turkish Anadolu Agency. “The forces fight against IS militants in Kirkuk, Amirli, Tuz Khormato, Bashir and Daquq, which mostly have population of Turkmen people. There are also Sunni Turkmen fighters in our forces.”

He added: “We established the 16th Brigade because of the serious need to combat IS insurgents after it had seized Amirli.”

As well as the 4,000 Shia fighters under Najar’s command, another 1,500 Sunni Turkmen have been armed by al-Hashd al-Shaabi, including 800 from Tal Afar. They are expected to take part in the offensive to recapture Mosul, a primarily Sunni city.

Operationally the Turkmen forces, some trained by Turkish troops, have been supporting Iraqi government forces and Kurdish Peshmerga as they attempt to push back IS militants in the area around Kirkuk.