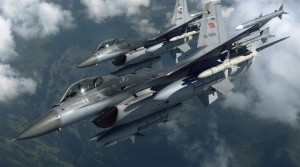 Two government officials said more than 40 jets took part in the strikes, which came after the terrorist PKK killed 16 Turkish soldiers in southeastern Turkey on Sunday, in their deadliest attack since the collapse of a two-year cease-fire in July.

Turkish Special Forces and the Gendarmerie Special Operations Unit also conducted a cross-border operation into northern Iraq to find terrorists attempting to flee, the Doğan news agency said. It is said that up to 40 rebels died in the overnight aerial operations.

The clashes, weeks before elections the ruling Justice and Development (AK Party) hopes will restore its majority, have left in tatters a peace process which President Recep Tayyip Erdoğan launched in 2012 in an attempt to end a three-decade insurgency that has killed more than 40,000.

The security source said F-16 and F-4 jets took part in the air operation which began around 10 p.m. on Monday and continued until 4 a.m., hitting areas around the PKK’s bases in Kandil, Basyan Avashin and Zap.

There was no immediate confirmation from the Turkish General Staff of the strikes, which the source said hit weapons and food stores as well as gun positions of the PKK.