You are here: Home / MidEastGulf / Turkish warplanes have not hit Islamic State targets in Syria since Nov. 24: US 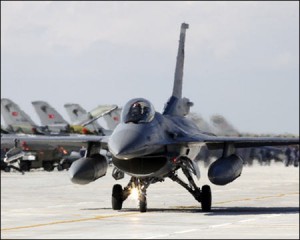 Turkish warplanes have taken part in air operations by United States-led coalition forces but have not bombed Islamic State targets in Syria since Nov. 24, when Turkey shot down a Russian fighter jet, a senior Turkish official said on Monday.

A U.S. official told Reuters last week that the United States had quietly put on hold a long-standing request for its NATO ally to play a more active role in the U.S.-led air war to allow time for Turkey-Russian tensions to ease.

Thousands of foreign fighters have crossed through Turkey to join Islamic State over the past few years, fuelling accusations from the government’s opponents that it is turning a blind eye.

But Turkish warplanes have carried out hundreds of bombing missions since July against bases of the Kurdistan Workers’ Party (PKK) in Turkish Kurdistan in the southeast of the country and Iraqi Kurdistan since the collapse of peace negotiation with the PKK after a suicide bombing blamed on Islamic State killed 32 pro-Kurdish activists in July 2015 in the Kurdish town of Suruc in Turkish Kurdistan.

Russia’s defence ministry said on December 2,  it had proof that Turkish President Tayyip Erdogan and his family were benefiting from the illegal smuggling of oil from Islamic State-held territory in Syria and Iraq.

In a briefing in Moscow, Russian defence ministry officials displayed satellite images which they said showed columns of tanker trucks loading with oil at installations controlled by Islamic State in Syria and Iraq, and then crossing the border into neighbouring Turkey.