You are here: Home / MidEastGulf / Turkish troops taking on Isil in ‘secret battle’ in Iraq

More than 1,000 soldiers are engaged in covert ground war with the Islamic State near their stronghold of Mosul, against Iraq’s 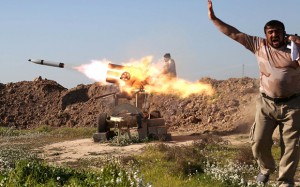 Turkish troops are locked in a covert fight against the Islamic State in north Iraq, the Telegraph has learned, despite Baghdad’s insistence that they leave the country.

Just nine miles northeast of the Isil stronghold of Mosul a number of tanks overlook the sprawling Nineveh plains, where they have been positioned for months.

With their barrels trained on the city, Ankara’s ground forces are engaged in shelling Isil, according to a Kurdish Peshmerga general.

“If the US was doing more the Turks wouldn’t have had to come in,” said General Bahram Yasin in reference to coalition efforts to tackle Isil.

Local witnesses have reported Turkish tanks moving around the base and shelling the insurgents. They also produced photographs showing two green camouflage tanks with distinctive turrets identified as Sabras (M60T), a model used by the Turkish military.

There are between 1,000 and 2,000 Turkish forces in Bashiqa according to Jabar Yawar, the chief of staff of the Kurdish Peshmerga Ministry.

“The Turks have gone there in agreement with the Baghdad government. We have no coordination, no relation and have made no requests for their deployment to that area,” said Mr Yawar.

The Iraqi government and the Kurdish regional government both claim the other is responsible for the Turkish presence.

Ankara’s move has drawn furious protest from the Iraqi government in Baghdad, as it signals a growing entente between the Turkish government and the Kurdistan Democratic Party (KDP) under President Masoud Barzani.

While Turkey’s own Kurds have been locked in an ongoing battle against Ankara for almost four decades, the Turkish government and the Iraqi Kurdish government have built a strong economic and political alliance.

This marriage of convenience has helped Ankara cement its presence in north Iraq and more importantly on the outskirts of Mosul, a city that until 1918 was a part of the Ottoman empire.

According to Aaron Stein, a senior resident fellow at the Atlantic Council, Ankara’s presence in Iraq is also a hedge against growing Iranian empowerment in Baghdad and Diyala.

“As part of a broader effort to deepen its influence in Iraq, Turkey sought an alliance with the KDP,” said Mr Stein. “Turkey’s actions suggest that it wants to be a key actor in the settlement of a post-ISIS Mosul.”

More than 150 Turkish soldiers, tanks and armoured personell vehicles arrived in December, in addition to 90 military trainers already there, training local Iraqis under the watchful eye of financer and former provincial governor Atheel al-Nujaifi, a close ally of the Turks and the KDP.

Iraq’s Prime Minister Haider al-Abadi called the move a “serious breach of Iraqi sovereignty.” The US envoy to the coalition against Isis, Brett McGurk also highlighted America’s opposition to any Turkish military deployment inside Iraq without Baghdad’s consent, but has not taken it any further.

This, says Michael Stephens of the Royal United Services Institute (RUSI) is a larger reflection of US priorities.

“They don’t really care if Turkey is there, as long as it doesn’t lead to war. They need to focus on the bigger prize, which is Isil,” said Stephens.

Turkish involvement has not only remained in place but it has been deepened to include offensive action on the ground and intelligence gathering. Critics say that this will pave the way for a permanent presence in Iraq.

According to Dr Mowaffak al Rubaie, an Iraqi MP and former National Security Advisor, Turkey’s long-term goal is to re-establish an Ottoman rule.

While the exact motives for Turkey’s presence in Iraq are not yet clear, Ankara’s extended stay and active role in the fight against Isil will add to an already complex mosaic of players, all bidding to have a stake in post-Isil Mosul.