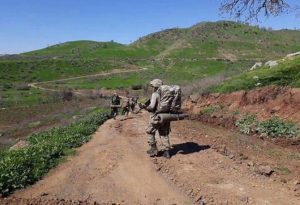 Turkish troops, backed by air coverage, have been deployed in northern Iraq amid violent clashes with fighters of the Kurdistan Workers’ Party (PKK), Arabs Today news website reported Monday according to iraqinews.com.

“The forces are now stationed in the sub-district of Sidakan, northeast of the Kurdistan Region’s capital, and have already set up fixed barracks in the border triangle between Iraq, Syria and Turkey,” Krmanj Izzat, the mayor of Soran city, said.

Izzat expected Turkish troops not to leave their positions in Iraq soon.

Meanwhile, Sidakan Mayor Ihsan Chalabi pointed out that the Turkish troops penetrated deep into his district “by 15 kilometers and established some 12 barracks in the area.”

He noted that heavy weapons and jet fighters were used in the clashes between the Turkish troops and PKK fighters.

Turkey’s move in Iraq is part of Ankara’s efforts to fight PKK members in northern Iraq and it comes one day after Turkish President Recep Tayyip Erdoğan announced wresting control of the Kurdish-majority Syrian city of Afrin after two months of heavy fighting.

More than 1,500 Kurdish fighters have been killed in a two-month assault by Turkish forces and allied Syrian rebels on the Kurdish enclave of Afrin, Al Arabiya quoted the Syrian Observatory for Human Rights as saying.

Most of them were killed air strikes and artillery fire. Also, over 400 pro-Ankara rebels had been killed since January 20, the observatory said.