You are here: Home / MidEastGulf / Turkish troops in Iraq repel IS attack 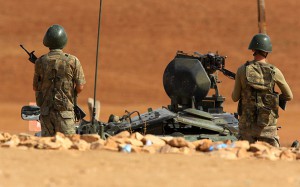 Turkey says it has repelled an attack by the so-called Islamic State on its troops in Bashiqa in northern Iraq, killing 17 militants.

There were no reported injuries or deaths on the Turkish side.

Turkey deployed at least 150 troops into northern Iraq last year, but it has been the subject of dispute between Turkey and the Iraqi government.

Turkey says its troops are only there to train Iraqi forces, but Iraq says Turkey is violating its sovereignty.

Turkey later acknowledged that there had been a “miscommunication” over the troop deployment.

The Bashiqa camp lies near Mosul, a city controlled by Islamic State (IS) since June 2014.

Turkey is part of the US-led coalition against IS, which has taken control of large parts of Syria and Iraq.