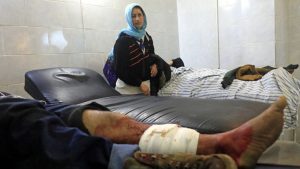 Afrin’s Health Council revealed the number of civilian casualties had risen to 212, calling for medical aid to be sent to the Afrin Hospital, like reported by kurdistan24.net.

“Medicine and medical aid are insufficient. Turkish bombardment on the city continues, and the number of casualties has increased,” Angela Rasho, co-chair of Afrin’s Health Council, said on Sunday in a press conference.

Rasho added that since the UN Security Council called for a 30-day-long ceasefire in Syria on Feb. 24, 33 civilians have died as a result of Turkish shelling.

Rasho mentioned that so far, 612 civilians have been wounded, among them 76 children and 82 women.

Recent UN reports state that over 15,000 people have been displaced in Afrin since the start of the Turkish military operation.

Ankara views the PYD, and its military wing, the YPG, and the YPJ, as a ‘terrorist’ group and an extension of the outlawed PKK, a group fighting a decades-long insurgency against the Turkish government in Turkey.