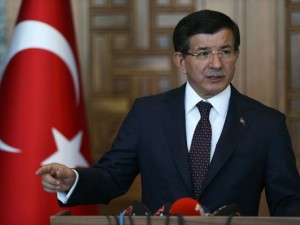 Davutoglu described ISIS as the “product of a crisis, not only the cause of a problem,” and said if the Syrian regime had been changed by Western arms long ago, Assad “wouldn’t be killing so many people, or pushing them to Turkey, Jordan, or Iraq, or Lebanon. There wouldn’t be any power vacuum for Daesh, for ISIS, to be active.”

“Assad lost this legitimacy long before; unfortunately, because of inactivity of international community, he continued his crimes, and he created a power vacuum–he admitted this vacuum a few days ago–and ISIS filled this vacuum,” the Turkish PM added, referring to the recent public statement in which Assad admitted the civil war is not going very well for his regime.

He went on to describe Assad as the individual most responsible for the humanitarian horrors of Syria, from his own use of indiscriminate (and chemical) weapons, to setting the table for ISIS. He called for more international support for moderate Syrian rebels–who have been distressingly difficult to find, or build into a force that can challenge both Assad and his terrorist enemies–and allowed that direct foreign military intervention to take out Assad may not be necessary.

Turkey’s long-standing grudge against Assad has been interpreted by various analysts as some combination of sectarian dispute (Turkey supporting the Sunnis against the Alawite Shiite regime), a proxy war between Turkey and Iran for dominance of the Middle East, and Turkey seeking stability in the region for economic reasons.

Davutoglu stressed that Turkey’s airstrikes against the PKK were not an attack against Kurds as a whole, but rather part of “a combined fight against terror, against any type of terrorist activity.” The internal stresses created in surrounding countries by the rise of ISIS remain matters of grave concern, especially in NATO member Turkey, which seems on the verge of coming apart in any of several unpleasant ways.

It has been speculated that Turkey reassessed its tolerance–or, according to its stronger critics, covert assistance–of ISIS after recent suicide bombings in Turkish cities. The Turks are using their air force to bomb ISIS positions in Syria now and recently announced they would allow American forces to use Turkish airbases for operations against the Islamic State, with an eye toward creating a protected “safe zone” along the Turkey-Syria border for refugees. However, Turkish Kurds suspect their government continues to regard them as a more serious threat than ISIS.

The Kurds, who would rank high on any list of strong critics of Turkey, are not entirely satisfied with this apparent sea change in Ankara’s attitude. The BBC quotes the leader of Turkey’s pro-Kurd political party, Selahattin Demirtas, charging that Turkish bombing runs against ISIS targets were actually a cover for airstrikes against the Kurds.

Specifically, Turkey has been fighting with the Kurdistan Workers’ Party, or PKK, which it has classified as a terrorist organization. Several Turkish soldiers have been killed by Kurdish separatists over the past few days. In response, Turkish warplanes hit PKK targets in northern Iraq on Tuesday night, according to a Reuters report quoted by the BBC. A State Department spokesman insisted the United States had not sanctioned these air attacks against the Kurds.

Demirtas also expressed concerns that the “safe zone”–which, with characteristic comical bumbling, the Obama administration refuses to call a “no-fly zone,” even though it will be one–was actually a move to checkmate Kurdish separatist ambitions, preventing Kurds in Iraq, Syria, and Turkey from hooking up and forming a Greater Kurdistan after they drive ISIS from the region. Whatever else one might think of Turkey’s conduct, it cannot be said that their concerns about Kurdish separatism are totally irrational. Given the heavy concentration of Kurds in the eastern part of Turkey, they’d lose a substantial chunk of the country if the Kurds seceded to form their own nation, a far greater loss than anything they think the Islamic State could conceivably inflict upon them.

Demirtas called on the Turkish government to get back into peace talks with the PKK, which seems like a remote possibility at the moment, given that President Recep Tayyip Erdogan just declared that “it is not possible for us to continue the peace process with those who threaten our national unity and brotherhood,” as quoted by International Business Times.

Erdogan’s party suffered a sound defeat during the nation’s recent elections, while Demirtas’ Kurdish People’s Party (HDP) did very well. Erdogan has been threatening to strip HDP representatives of their parliamentary immunity to prosecution so they can be investigated for links to terrorism. Demirtas responded by announcing members of his party would voluntarily waive their immunity, essentially daring Erdogan to investigate them and be embarrassed by the results.

“Our only crime is winning 13 percent of the vote,” declared Demirtas, who also insisted that the PKK is no longer interested in separatism, and continues to bear arms against the Turkish government, only because Erdogan’s government withdrew from peace talks. The Kurdish Rudaw news service quotes Demirtas claiming the PKK was only a week from disarming, but “Ankara didn’t wait.”

Demirtas’ position is perhaps a bit difficult to square with what the PKK has been up to lately–those Turkish soldiers and police did not commit suicide–but he has a point about Erdogan’s government sticking to its agenda and party line, no matter what superficial changes in policy they make.