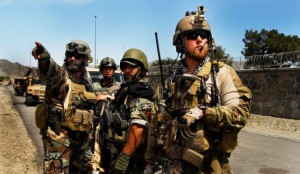 Turkish President Recep Tayyip Erdoğan has called on the international community to start ground operations against Islamic State militants in Iraq, calling the militants a ‘virus’.

Erdoğan welcomed Iraqi President Fuad Masum on Wednesday and held a joint press conference following their meeting. He condemned IS militants and their activities for causing damage to Muslims as a whole and Islam as a religion, describing them as a ‘virus’.

A land operation is necessary to support air operations in Syria and Iraq if the military operation against IS is to be successful, Turkish President said.

“I don’t believe that airstrikes are sufficient to defeat Da’esh [IS] in Syria and Iraq. A ground offensive is needed along with airstrikes so that air operations can be successful,” added Erdoğan.

Masum agreed with Erdoğan and also used the term ‘virus’ to describe IS insurgents, saying that they are spreading very quickly.

“If the virus is not destroyed, it may spread to other countries in the region and eventually throughout the world,” added Masum, also calling for a joint operation to fight the terrorist organisation.

Masum praised Turkey’s support in fighting IS and said, “Turkey is an extremely important neighbor for Iraq.” He added that they look at Turkey’s development, economy, social reforms and politics with admiration.

Turkey has been one of the most prominent supporters of the Iraqi government, and the Kurdish Regional Government and its Peshmerga forces, providing military training and arms as well as humanitarian aid.

Turkish leaders have repeatedly called on the Iraqi government to avoid taking a sectarian stance against its citizens while fighting extremist groups. The ongoing war in Syria was among the topics discussed between the two presidents.

Masum and a high-level governmental delegation will be staying in Turkey until April 23 to discuss regional and international developments with special emphasis on the fight against IS. He will also hold meetings with Prime Minister Ahmet Davutoğlu and Parliamentary Speaker Cemil Çiçek.