You are here: Home / MidEastGulf / Turkish presence in Iraq is no different to Daesh occupation 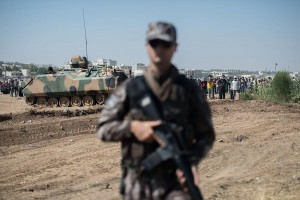 Turkey’s military presence in Iraq has been compared to that of Daesh by the spokesperson of a Shia militia group with ties to Iran.

In an interview with Al Mayadeen Badr Brigade spokesman Karim Al-Nuri he described Turkish President Recep Tayyip Erdogan’s military interventions in Iraq, without the approval of Baghdad, as a violation of international norms.

Turkish forces in Iraq are part of an international mission to defeat Daesh. Last weekend the Turkish parliament approved a one-year extension of an existing mandate to use Turkish troops abroad in Syria and Iraq. It allows military action in Turkey’s two southern neighbours against Daesh and other groups deemed by Ankara to be terror organisations.

Al-Nuri stressed that Iraq is a sovereign country and it will decide who should be involved in operations to liberate Mosul. “We will participate in the liberation of Mosul and all of Iraq and we do not require Erdogan to fix our problem,” he said.

His comments come as the Iraqi Foreign Ministry rejected statements issued by Erdogan regarding the battle to liberate Mosul. The ministry said it should Turkey was interfering in Iraq’s internal affairs and were violations of the principles of the bilateral relations and actions of good neighbours.

In a statement, ministry spokesperson Ahmed Gamal stressed that the Iraqi people will liberate Mosul and defeat Daesh.

Warning that Turkey’s interference would affect mutual relations between Baghdad and Ankara, calling on Erodgan to withdraw his troops from Iraq.