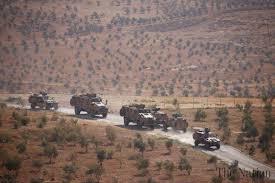 The Turkish military has begun setting up observation posts in a Syrian border province dominated by al-Qaida linked militants, the armed forces said Friday according to dw.com.

Turkish special forces and about 30 military vehicles rolled into Idlib province in northwestern Syria late Thursday to implement a “de-escalation zone” as part of an agreement struck in Kazakhstan with Russia and Iran, both key backers of Syrian President Bashar Assad’s regime.

The Turkish military said in a statement its forces moved into Idlib to secure a ceasefire, ensure the delivery of humanitarian aid and provide conditions for displaced persons to return to their homes.

The Turkish troop deployment comes after “exploratory operations” in Idlib led by Turkish-backed rebels who moved into Idlib province from Turkey over the weekend.

Turkish President Recep Tayyip Erdogan on Saturday announced the beginning of the operation, saying Ankara would not allow a “terror corridor” on its border.

HTS is a rival of Turkish backed rebels and does not recognize the “de-escalation” deal, raising the prospect the Turkish military and the rebels it backs could clash with the jihadi outfit.

On Sunday morning, HTS fighters opened fire on Turkish forces who were removing a section of the border wall with bulldozers, eyewitnesses and the London-based Syrian Observatory for Human Rights monitor said.

However, other witnesses and the Turkish media reported HTS fighters escorted Turkish forces into Idlib on Thursday, suggesting there may be an understanding between the two sides.

Are Kurds the real target?

Rebels backed by the Turkish military carved out a “safe zone” in northern Aleppo province earlier this year after a months-long offensive that pushed the “Islamic State” (IS) from a section of the border.

The Turkish-backed military operation was designed to remove IS from the border and block a US-backed Syrian Kurdish militia from connecting areas under their control to the east with the Kurdish-controlled enclave of Afrin to the west.

Ankara considers the Kurdish YPG militia a terrorist group over its alleged links to the Kurdistan Workers’ Party (PKK), which has fought a more than three-decade insurgency against the Turkish state.

The same Turkish-backed rebels are involved in the Idlib operation, after they were transported through Turkey from northern Aleppo province.

The Kurds say the current military operation in Idlib is designed to surround Afrin.

Turkey was one of the biggest supporters of rebels seeking to oust Assad.

But Ankara’s calculation changed after Russia’s military intervention in 2015 made it clear that toppling the regime was unrealistic.

Turkey has since focused on working with Russia and Iran to end the conflict and set its sights on thwarting the US-backed Kurdish forces fighting IS.