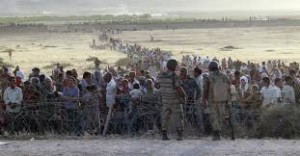 In an urgent memorandum the Turkish Military has requested new technology to help monitor the Syrian border and survey the Islamic State of Iraq and the Levant (ISIL).

The June 14 memorandum, issued on the day where thousands of Syrian refugees began crossing into Turkey after fleeing the fight between ISIL and the Syrian Kurdish troops aided by US airstrikes over the town Tel Abya in the Raqqa district, expresses calls for more drones and equipment to be deployed in the region to better guard the 910 km border.

“The drones are simply not enough. A request has been put in to have zeppelins flown in and for cameras to be placed on rocks,” a military official, speaking in anonymity to Bugün Daily. The memorandum has been issued to the Prime Ministry Office and Public Diplomacy, and thus forwarded to the Ministry of National Defense, The Disaster and Emergency Management Presidency of Turkey (AFAD).

54,000 security forces from 31 stations are reported to be in the region, which is frequently used by foreign fighters to join ISIL. The memorandum indicates that 90 percent of the drones and planes used in surveillance have been deployed to the Syrian border. The military has noted the number of Syrian refugees to be around 1,626,000.

In other security measures 363 ditches have been dug, 90km worth of fences and a 7km wall has been constructed in addition to 2,210km of roads paved to patrol the border.

In the meantime the general staff has also emphasized facts and figures concerning illegal border crossings since 2011 when the Syrian civil war begun between the Syrian regime and those opposed to it, subsequently followed by the invasion of the ISIL.

175,000 illegal border crossing attempts to both sides have been stopped – 3,582 individuals have been apprehended, along with 5.5 million liters of fuel, and 4,000 firearms.

The volume of individuals apprehended and illegal supplies caught had skyrocketed ten times from 2011 to 2012 and four times by 2013.