You are here: Home / Mediterranean / Turkish mercenaries’ confessions: fighting in Libya in exchange for Turkish promises to them 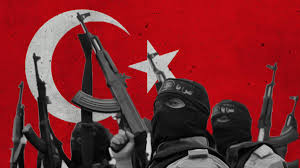 According to the latest statistics of the Syrian Observatory for Human Rights, Turkey has sent more than 18,000 Syrian mercenaries to Libya, of whom about 7,000 returned to Syria, in addition to about 10,000 from other nationalities, like reported by syriahr.com.

Thousands of mercenaries join the groups affiliated with the government of National Accord in Tripoli, which is currently planning to seize the strategic city of Sirte, amid a state of international anticipation that subsided with the conclusion of a ceasefire agreement in Libya on Friday.

The mercenary Taha Hammoud who is fighting alongside the Accord government after Turkey sent him to Libya said: “We have freedom of movement in Misrata. We can go out on our own. We found gold in many abandoned houses.”

Hammoud admitted in his interview to the “Investigative Journal” that he and those with him looted the homes of the Libyans in Misrata, adding: “Here, they did not pay us what they promised, so it is a good way to earn more money.”

According to the newspaper, the Syrian mercenaries were promised that they would receive a monthly salary of about two thousand dollars for the fighting in Libya, but a large number of them said that they were paid much less, while some explained that they had remained in Libya for more than 5 months and received only one payment.

It revealed that during the meeting that took place a few days ago in Libya between the Qatari Defense Minister Khaled al-Attiyah, the Turkish Minister Hulusi Akar and the Prime Minister of Tripoli, Fayez al-Sarraj, they agreed to increase the salaries of Syrian mercenaries by 30 percent.

But a member of “al-Hamza Division” mercenaries stationed in Ain Zara area near Tripoli, and is called Omar believes that this is “just talk.”

He continued, “Our leaders tell us that we will get salaries soon, but this is not happening. They may have said that they would pay more because they thought they would need us to attack Sirte, but why do they need us now?” In an indication to the ceasefire agreement reached recently.

Omar revealed that he gets more information from his friends in Syria than from anyone in Libya: “They do not tell us anything here. We hear news from Syria and we hear rumors as well. We do not know anything for sure until it happens.”

Despite the ceasefire agreement, Turkey is still continuing to train mercenaries with the aim of likely sending them to Libya, according to the Observatory.