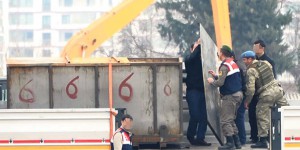 The Nokta newsweekly magazine published an investigative piece on Monday, revealing the secretive arms trade between Libya and Syria via Turkey that has enriched senior officials on the back of violence and conflict.

After tracing the markings on the ammunition and casings, the magazine discovered that the weapons and ammunition originated from Libya and ended up in the hands of Islamic State of Iraq and the Levant (ISIL) militants.

The magazine examined photos published recently by the Cumhuriyet daily that showed steel containers filled with mortar shells and ammunition underneath boxes of medicine. The daily also published a video showing the containers on the trucks being opened and searched by gendarmes.

Both the photos and video were shot by the gendarmes at the order of Public Prosecutor Aziz Takçı when the authorities intercepted the Syria-bound trucks belonging to the National Intelligence Organization (MİT) in January 2014.

It also noted the wooden boxes had sand inside, another indication that they were shipped from the Libyan military’s arsenal.

Among the items found were what appeared to be mortar shells with blue tips that carried markings of “FULL CHARGE, UOF-412, 100mm G.” The magazine said UOF-412 mortar shells are a 100 mm high-explosive fragmentation shell used in the D-10 type Soviet-developed tanks or equivalent models such as the T-54 and T-55 battle tanks. Full charge means the shells were packed with high-explosives.

According to Nokta, only the Syrian army and ISIL have tanks that are capable of using these mortars. It said Turkmen have never had these tanks and even today do not have any. Turkish officials claimed the cargo was destined for Turkmens in Syria but Syrian Turkmen also denied that they had ever received such ammunition from Turkey during that period.

It is known that ISIL has taken some tanks from the Syrian military in areas they have captured and needed ammunition to put them into use. The Syrian army reportedly had around 2,000 T-54 or T-55 tanks.

The Nokta newsweekly said many videos and photographs have appeared on social media platforms showing how ISIL, the al-Nusra Front and radical groups were using these model tanks and mortar shells. It printed a photo displaying a militant from the al-Nusra Front with a similar shell to that found in the MİT truck loading it into a tank.

In another crate on the truck, dozens of wooden boxes that measured 40 cm by 50 cm included hand grenades. Each wooden box contained 20 round canisters that were jam-packed with assault grenades. Nokta said ISIL members were photographed with similar wooden boxes on many occasions. Some of the canisters were partially covered with sand.

Upon publication of the story by the Cumhuriyet, the İstanbul Chief Prosecutor’s Office on the same day launched two investigations into Can Dündar, the editor-in-chief of the daily who is also the author of the report, regarding crimes committed by revealing state secrets and espionage.

A gag order was also issued by a court on all publications that feature pictures from the investigation file that display the search of the intercepted trucks’ cargo.

The leaders of Turkey’s opposition parties unanimously criticized the government for illegally supplying arms to opposition groups in Syria, while offering support to the daily’s publication of the report.

CHP leader Kemal Kılıçdaroğlu lashed out at the government for arming rebel groups in Syria, saying: “If blood is being shed there [in Syria], those who are responsible for that are gentlemen in Ankara. The hands of those gentlemen are tainted with blood.”

The Nokta newsweekly magazine, which was closed by its owners in 2007 after publishing news stories revealing that the Turkish Armed Forces (TSK) had a blacklist of journalists and that some former generals had plotted to overthrow the Justice and Development Party (AK Party) government in 2004, hit newsstands last month after an almost eight-year hiatus.