You are here: Home / Europe / Turkish jihadists terrorize the French city of Dijon 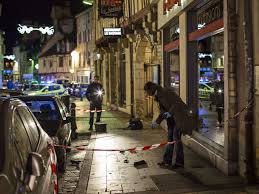 Pro-Erdogan Turkish jihadists took to the streets in the city of Dijon on Thursday night and shouted anti-Armenian slogans and shouting “Allahu Akbar”, ike reported by anfenglish.com

A video showed a French man telling the Turkish fanatics, “If you don’t like it here, go back to Turkey, go close to Erdogan.”

On the other hands the Central Council of the Armenian National Committee (ANC) of France wrote on its Facebook page that members of the Turkish nationalist Gray Wolves organization and movement took to the streets in Dijon with threats of violence against Armenians,

“After Vienne and dozens of other cities, Erdogan’s Gray Wolves took to the streets—as usual, with calls for violence and hatred—waving the Turkish flag, the war flags of the Ottoman Empire and the emblems of the Gray Wolves. Fear should not exceed the rule of law. We expect a tough response from the French Interior Minister,” the ANC France statement said.

It was noteworthy that this action coincided with the brutal murder of three people by an attacker shouting “Allahu Akbar” in a church in the city of Nice.

Turkish racists embarked on an Armenian hunt in the suburb of Decines, in Lyon, called “Little Armenia”, on Wednesday evening.

More than 250 people carrying Turkish flags called for violence against Armenians. Turkish racists could be heard shouting “Where are you, Armenians?”, “We will kill the Armenians” and “Allahu Akbar” as could be seen in the videos posted on social media.