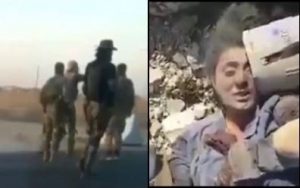 Turkish jihadist forces in Syria murdered two Kurdish prisoners and shot down a woman politician during Turkey’s offensive in Syria on Saturday. The reports have shocked observers of Turkey, a NATO member, and the increasingly brutal campaign it is waging in Syria.

In one incident Turkish-backed extremists who are members of an Arab rebel group that is embedded with Turkey’s military operation are accused of murdering Hevrin Khalef, a female politician in eastern Syria. In a second incident the Arab fighters backed by Turkey murdered two Kurdish prisoners, one of them tied up, on a video. Many of the extremists Turkey has recruited to fight in Syria have openly shouted jihadist slogans claiming they are coming to murder the “kuffar” or “infidels.” Their behavior in the fighting has been compared to ISIS.

Turkey has used the Syrian Arab fighters as a way to avoid casualties, unleashing them across the border to attack and murder Kurds after US President Donald Trump announced the US would leave parts of Syria and open the airspace for Turkish airstrikes. Since October 9 Turkey has launched devastating airstrikes across northeast Syria, causing 100,000 to flee an area that was peaceful. US forces, sheltering in place near Kobane, even came under artillery fire. Turkey has sought to send a message that nothing will prevent it from continuing its operation and using Syrian Arab forces as cannon fodder to attack Kurdish areas and sack towns and villages.

The cynical ploy is part of Turkey’s attempt to channel Arab fighters from Idlib and other parts of Syria to use them against the mostly Kurdish Syrian Democratic Forces. Turkey has promised them they will be resettled in 140 new towns with 200,000 new homes.

On Saturday the US appeared to also release funds for minorities in eastern Syria, at the same time that the US continued to permit airstrikes on its own SDF partners and in areas where minority Christians and others live. The US has now expressed concern about Turkey’s operation, an operation that it made the way for. NATO has given tacit approval to Turkey, asking only for restraint, and some UN statements have also appeared to approve of Turkey’s attacks, also urging only restraint.

With the videos of executions and murder of a female politician the operation in northern Syria appears designed to sow terror and destruction. Although it has been condemned by some US politicians and some European countries have cut arms sales to Turkey, there appears no clear way to stop the continuing abuses and chaos being unleashed in eastern Syria.