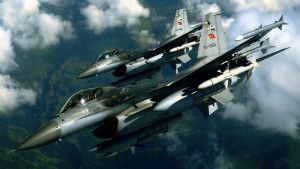 Turkish jets have joined the U.S.-led coalition in the fight against the Islamic State of Iraq and the Levant (ISIL) and hit targets in Syria, Turkish Foreign Ministry has announced.

“The decisions taken by Turkey and the United States to further deepen the cooperation regarding the fight against DEAŞ had been made public,” the Foreign Ministry said in a written statement on Aug. 29, using a different acronym for ISIL.

“A technical document on the Turkish Air Forces’ involvement in the International Coalition’s ongoing Operation Inherent Resolve against DEAŞ was signed with the United States on Aug. 24,” the statement read.

“In this regard, our warplanes, along with the Coalition’s planes, started joint air operations last night on DEAŞ targets in Syria that also threaten our country’s security.”

“Turkey will continue its active support for the efforts to eliminate the terror threat stemming from DEAŞ, which it put on the terrorism list in 2013, both on national level and as part of the International Coalition,” said the ministry.

Last month, Turkey had made a preliminary step toward joining the counter-offensive by allowing the U.S. planes to use İncirlik Air Base to attack ISIL positions in Syria. But Turkey’s operations against ISIL had been limited.

On July 24, Turkish warplanes attacked ISIL targets in Syria, but not as part of the coalition operation.