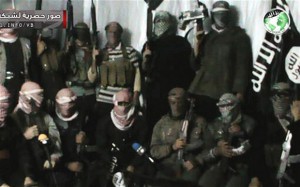 Turkey’s state intelligence agency helped deliver arms to parts of Syria under Islamist rebel control during late 2013 and early 2014, according to a prosecutor and court testimony from gendarmerie officers seen by Reuters.

The witness testimony contradicts Turkey’s denials that it sent arms to Syrian rebels and, by extension, contributed to the rise of ISIS, now a major concern for the NATO member.

Syria and some of Turkey’s Western allies say Turkey, in its haste to see President Bashar Assad toppled, let fighters and arms over the border, some of whom went on to join ISIS which has carved a self-declared caliphate out of parts of Syria and Iraq.

Ankara has denied arming Syria’s rebels or assisting hardline Islamists. Diplomats and Turkish officials say it has in recent months imposed tighter controls on its borders.

Testimony from gendarmerie officers in court documents reviewed by Reuters allege that rocket parts, ammunition and semi-finished mortar shells were carried in trucks accompanied by state intelligence agency (MIT) officials more than a year ago to parts of Syria under Islamist control.

Four trucks were searched in the southern province of Adana in raids by police and gendarmerie, one in November 2013 and the three others in January 2014, on the orders of prosecutors acting on tip-offs that they were carrying weapons, according to testimony from the prosecutors, who now themselves face trial.

While the first truck was seized, the three others were allowed to continue their journey after MIT officials accompanying the cargo threatened police and physically resisted the search, according to the testimony and prosecutor’s report.

President Tayyip Erdogan has said the three trucks stopped on Jan. 19 belonged to MIT and were carrying aid.

“Our investigation has shown that some state officials have helped these people deliver the shipments,” prosecutor Ozcan Sisman, who ordered the search of the first truck on Nov. 7 2013 after a tip-off that it was carrying weapons illegally, told Reuters in a interview on May 4 in Adana.

Both Sisman and Takci have since been detained on the orders of state prosecutors and face provisional charges, pending a full indictment, of carrying out an illegal search.

The request for Sisman’s arrest, issued by the Supreme Board of Judges and Prosecutors (HSYK) and also seen by Reuters, accuses him of revealing state secrets and tarnishing the government by portraying it as aiding terrorist groups.

Sisman and Takci deny the charges.

“It is not possible to explain this process, which has become a total massacre of the law,” Alp Deger Tanriverdi, a lawyer representing both Takci and Sisman, told Reuters.

“Something that is a crime cannot possibly be a state secret.”

More than 30 gendarmerie officers involved in the Jan. 1 attempted search and the events of Jan. 19 also face charges such as military espionage and attempting to overthrow the government, according to an April 2015 Istanbul court document.

An official in Erdogan’s office said Erdogan had made his position clear on the issue. Several government officials contacted by Reuters declined to comment further. MIT officials could not immediately be reached.

“I want to reiterate our official line here, which has been stated over and over again ever since this crisis started by our prime minister, president and foreign minister, that Turkey has never sent weapons to any group in Syria,” Erdogan’s spokesman Ibrahim Kalin said Wednesday at an event in Washington.

Erdogan has said prosecutors had no authority to search MIT vehicles and were part of what he calls a “parallel state” run by his political enemies and bent on discrediting the government.

“Who were those who tried to stop MIT trucks in Adana while we were trying to send humanitarian aid to Turkmens?,” Erdogan said in a television interview last August.

“Parallel judiciary and parallel security … The prosecutor hops onto the truck and carries out a search. You can’t search an MIT truck, you have no authority.”

One of the truck drivers, Murat Kislakci, was quoted as saying the cargo he carried on Jan. 19 was loaded from a foreign plane at Ankara airport and that he had carried similar shipments before. Reuters was unable to contact Kislakci.

Witness testimony seen by Reuters from a gendarme involved in a Jan. 1, 2014 attempt to search another truck said MIT officials had talked about weapons shipments to Syrian rebels from depots on the border. Reuters was unable to confirm this.

At the time of the searches, the Syrian side of the border in Hatay province, which neighbors Adana, was controlled by hardline Islamist rebel group Ahrar al-Sham.

The Salafist group included commanders such as Abu Khaled al-Soury, also known as Abu Omair al-Shamy, who fought alongside Al-Qaeda founder Osama bin Laden and was close to its current chief Ayman al-Zawahiri. Al-Soury was killed in by a suicide attack in Syrian city of Aleppo in February 2014.

A court ruling calling for the arrest of three people in connection with the truck stopped in November 2013 said it was loaded with metal pipes manufactured in the Turkish city of Konya which were identified as semi-finished parts of mortars.

The document also cites truck driver Lutfi Karakaya as saying he had twice carried the same shipment and delivered it to a field around 200 meters beyond a military outpost in Reyhanli, a stone’s throw from Syria.

The court order for Karakaya’s arrest, seen by Reuters, cited a police investigation which said that the weapons parts seized that day were destined for “a camp used by the Al-Qaeda terrorist organization on the Syrian border.”

Reuters was unable to interview Karakaya or to independently confirm the final intended destination of the cargo.

Sisman said it was a tip-off from the police that prompted him to order the thwarted search on Jan. 1, 2014.

“I did not want to prevent its passage if it belonged to MIT and carried aid but we had a tip off saying this truck was carrying weapons. We were obliged to investigate,” he said.