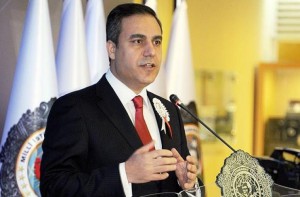 In the light of the tensions around the downing by a Russian warplane by Turkey, recent comments by the chief of Turkish intelligence, who criticised the Russian intervention in Syria, and said that the West should accept Islamic State, have surfaced.

Hakan Fidan, the head of Turkey’s National Intelligence Organization, known by the MİT acronym, has drawn a lot of attention and criticism for his controversial comments about Islamic State, or ISIS.

“ISIS is a reality and we have to accept that we cannot eradicate a well-organized and popular establishment such as the Islamic State; therefore I urge my western colleagues to revise their mindset about Islamic political currents, put aside their cynical mentalité and thwart Vladimir Putin’s plans to crush Syrian Islamist revolutionaries,” the Anadolu News Agency quoted Mr. Fidan as saying on 15 November.

Fidan further added that in order to deal with the vast number of foreign jihadists hoping to travel to Syria, it is imperative that ISIS must set up a consulate or at least a political office in Istanbul. He underlined that it is Turkey is commited to providing medical care for all injured people fleeing Russia’s ruthless airstrikes, regardless of their political or religious affiliation.

Western politicians have made big efforts not to criticise Turkey, a NATO member, for tacitly supporting Islamic State, despite multiple evidence.

The comments by the Turkish security official will likely be an embarrassment for the EU, which is rolling out the red carpet for the country’s Prime Minister, Ahmet Davutoğlu, on Sunday (29 November) on the occasion of an EU-Turkey summit.

At a recent event organised in Brussels by the Atlantic Treaty Association (ATA), Mohamed Dahlan, former minister and National Security Advisor of the Palestinian National Authority, said that the West was turning a blind eye to Islamic State selling oil to Turkey.

Terrorism in Syria “came from Turkey”, and that the West “knows that”, Dalhan said.