You are here: Home / MidEastGulf / Turkish incursion into Iraq intensifies 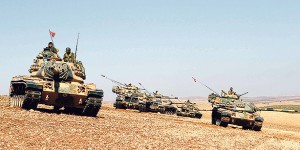 Turkey’s recent deployment of troops and tanks into northern Iraq has caused a major diplomatic row between Ankara and Baghdad, but experts say Turkish forces are there to stay.

“Honestly speaking there is not much Baghdad can do,” Aydın Selcen, the former Turkish consul to Erbil [capital of the Kurdistan Regional Government (KRG) in northern Iraq] told The Media Line.

On December 4, Turkey sent at least 150 soldiers and 20 to 25 tanks to a military facility in the small Kurdish Iraqi town of Bashiqa, 19 miles north of Mosul, where it has been assisting in the training of Iraqi forces

The Islamic State (ISIS) captured the Sunni-majority city of Mosul (population about 1.5 million) in a shocking lightning offensive in June of last year. Plans to retake the city stalled, though Kurdish forces have made recent progress in cutting off its supply routes.

“Turkey’s main enemy is not ISIS, but the PKK,” Professor Bağcı told The Media Line.

“It was actually one of the biggest national security and intelligence failures,” Ünver tells The Media Line. “They want to rectify that mistake. There’s a prestige issue there.”

Baghdad says the Turkish troops don’t have permission to be there and must leave immediately, calling the situation a “crisis” and threatening to resort to the United Nations.

Powerful members of the Iraqi parliament have called for military strikes against the Turkish forces, though such a drastic measure is unlikely.

Ankara claims that Iraqi Prime Minister Haider al-Abadi himself invited the Turkish troops. It refuses to withdraw its deployment but has pledged to not send reinforcements.

Turkish Prime Minister Ahmet Davutoğlu said the troops were needed to protect Turkey’s already present forces in Iraq from ISIS fighters, to train Iraqi forces to fight ISIS, and to maintain stability in the region.

Washington, which has been leading air strikes on ISIS targets in Iraq and Syria for over a year says it doesn’t support any military deployments in Iraq without Baghdad’s consent. But Washington too is unlikely to antagonize Ankara.

Massoud Barzani, leader of the autonomous KRG that currently controls Bashiqa, welcomed the Turkish troops and said he signed the agreement for their deployment on November 2.

Selcen, Turkey’s former consul to Erbil, says that the deployment shouldn’t come as a surprise. It is, he says, merely a reinforcement of Turkish forces that have been in Iraq for decades.

Turkish military trainers have been working with Kurdish, Arab, and Turkmen fighters in Bashiqa for about two years. To counter militants from the PKK, that Ankara considers its enemy, Turkey has also maintained military units, including heavy armor, throughout northern Iraq since the end of the 1991 Gulf War.

Selcen says the latest reinforcements have transformed Bashiqa into a permanent forward operating base for Turkey, but added that its soldiers have no offensive purpose, even in an expected assault on Mosul. “That would be stretching reality a bit.”

“It’s a signal,” he said. “A political message to all parties interested. To Erbil, it means, ‘we are with you.’ To Baghdad, it means more or less ‘we don’t care much about what you say.’ To Tehran and Moscow it means in a now-unified war theatre in Syria and Iraq, ‘you are not on your own, we are here too.’ To Washington it says […] ‘we are allies with you in this but we are also able to move when need be according to our own national interests.’”

Soner Çağaptay, the director of the Washington Institute’s Turkish Program, says that Baghdad has only now decided to voice its concern at Turkey’s long-time presence in its northern territories because it is pressured by Russia and Iran, each vying for influence in the country.

“This is in my view a coordinated Iranian-Russian pushback,” he told The Media Line. “They have gone to the government in Baghdad and told them to stand up to the Turks.”

Russia is still furious about Turkey’s downing of an SU-24 jet on November 24, after the aircraft allegedly entered Turkish airspace.

However, Kirk Sowell, a political risk analyst and publisher of Inside Iraqi Politics, says that Shia-dominated Baghdad views Turkey negatively regardless of Russian or Iranian influence.

“There is overwhelming, near-unanimous opposition [to Turkey] on the Shia street,” Sowell told the Media Line, speaking from Ottawa.

Sowell says there was never a formal agreement between Ankara and Baghdad allowing Turkish forces entry.

He believes the friction between the two countries is not only sectarian (Turkey is majority-Sunni and Iraq majority Shia) but also a consequence of Turkey’s support for the KRG and the widely-believed rumor that Ankara supports ISIS.

Much to Baghdad’s unhappiness, the KRG enjoys significant autonomy and openly hopes for independence from Iraq.

Turkey and the KRG have enjoyed very good relations at least since 2010, when Ankara established a consulate in Erbil.

“Erbil right now is essentially a colony of Turkey,” Sowell says. “The only reason it’s able to function at all is because the Turks keep loaning them money.” Erbil is also only able to export oil independently of Baghdad through Turkey.

Ankara is using its Bashiqa base to train Kurdish Peshmerga forces and support an anti-Baghdad Sunni Arab militia.

Sowell says the only force strong enough to retake Mosul are the Iraqi Armed Forces, possibly with the assistance of Shia militias and the Kurdish Peshmerga.

However, Baghdad’s army has proven itself unwilling to take casualties and is notoriously disorganized. Furthermore, it can only reach Mosul by crossing through territory held by the KRG—requiring the acquiescence of President Barzani.

“You cannot ‘liberate’ that kind of a [large Sunni] city with Shia forces or the so-called national Iraqi army. It’s up to the Mosul Arabs to get rid of ISIL there,” he says.

Ünver, the international relations professor at Kadir Has University, agrees that any kind of Shia force retaking Mosul could end in disaster.

“If a Shiite group comes in and acts like a bull in a china-shop and starts killing Sunni civilians, that’s going to create even more tensions, which feeds into the whole ISIS narrative of being the only ones who can defend Sunnis,” he says.

From Ünver’s point of view, the Peshmerga should be armed and take Mosul instead. He considers a recent vote in the US House Foreign Affairs Committee allowing Washington to directly arm the Peshmerga without going through Baghdad is a significant development.

According to Ünver, retaking Mosul is likely to be very difficult because of the large number of civilians in the city, who ISIS does not in general allow to flee. Airstrikes would therefore be impossible without significant civilian casualties.

“Basically, ISIS is forcing whoever is going to retake Mosul into a street-by-street, building-by-building Stalingrad type of war.”

On the same day, Turkish president Recep Tayyip Erdoğan announced that between Turkey, the US, and KRG officials will meet on December 21.