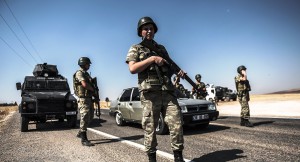 Turkish special forces have crossed into Syria as part of a Turkish operation to rid a Syrian border town of Islamic State group militants.

Private NTV television says the Turkish special forces entered Syria on Wednesday in what it described was an “intruder mission” to carry out “pinpoint operations” against IS as part of the mission to clear the town of Jarablus of the extremists.

Turkish government officials could not immediately confirm the report.