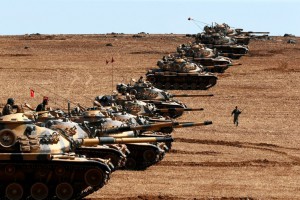 Ankara has put all security forces on high alert in anticipation of blowback over possible intervention in Syria. The Ministry of Interior Affairs has begun briefing the governors and police chiefs of all southeastern provinces bordering Syria at the ministry building in Ankara and the Turkish National Police Headquarters respectively.

The security forces have been ordered to maintain high alert for 24 hours against any possible crisis stemming from Syria. They were also warned that the Islamic State of Iraq and the Levant (ISIL) or other illegal terrorist groups might engage in assassinations to stoke chaos in the case of any cross-border operation by Turkish troops. The ministry has demanded emergency precautions be taken in case of such an eventuality.

Similarly, entry or exit through border gates will be monitored at the highest level.

The ministry has also authorized the use of special forces units in city centers in case of a possible war. Bomb disposal units have also been ordered to take action against any suspicious packages found in refugee camps or city centers.

The ministry has also requested that the Prime Ministry’s Disaster and Emergency Management Directorate (AFAD) and the Turkish Red Crescent, which have representative offices in the affected border provinces, also be briefed of any possible dangers.