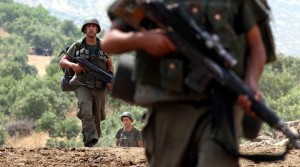 The Ministry of Foreign Affairs sent the draft bill to acting Prime Minister Ahmet Davutoğlu on Thursday. The bill was approved during Friday’s cabinet meeting and signed by Davutoğlu before being sent to Parliament Speaker İsmet Yılmaz.

A similar bill passed in October last year specifically mentioned the Islamic State of Iraq and the Levant (ISIL) and the Kurdistan Workers’ Party (PKK).

This year’s bill focuses mostly on the outlawed Kurdish group, “The risks and threats against our national security keep growing. The PKK continues to operate in northern Iraq. We have observed a growth in the terrorist organization’s activity in Syria and Iraq.”