You are here: Home / MidEastGulf / Turkish blast ‘kills at least 10’ in Suruc, near Syrian border 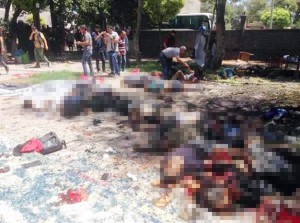 An explosion in Turkey near the besieged Syrian border town of Kobani was feared to have left several people dead and at least 20 injured.

The blast hit a cultural centre in the southeastern Turkish town of Suruc on Monday.

A local broadcaster claimed at least 10 people were killed in the explosion, Reuters reported.

It was not immediately clear what caused the blast in the town, which is around six miles from Kobani, which has faced Islamic State attacks in recent months.