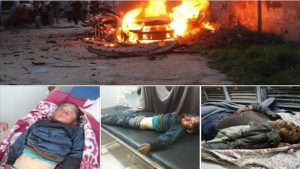 Dozens of Syrian civilians, including children, have lost their lives when Turkey’s military and its allied militiamen bombarded Syria’s Kurdish northwest city of Afrin, multiple sources on the ground said according to kurdistan24.net.

“More than 60 shells fell on the neighborhoods of Terande, Ashrafieh, the entrance to Jinderes road, and Diesel (Mazout) road in the city of Afrin,” reported the Afrin Media Center (AMC).

AMC is a Syria-based information office in Afrin city that has been documenting the Turkish assault on the region since its launch on January 20.

Kurdistan 24 learned from an official of Afrin city’s only hospital that deaths as a result of the shelling had so far exceeded 12 civilians since the night before, with an unknown total count of those injured.

Juan Mohammad, Director of Afrin Hospital, said his medical staff was having difficulty treating the high capacity of wounded civilians since dozens of casualties arrive every hour as a result of the heavy bombardment on the city.

The Syrian Observatory for Human Rights, a UK-based organization that reports on the war, said the number of civilians who were killed and injured since Wednesday in the military onslaught of the city had reached 44.

Turkey sees the YPG as a “terrorist group” and an extension of the Kurdistan Workers Party (PKK).

The Turkish army announced on Monday that it had encircled the city. On Wednesday, the UN office for humanitarian affairs said that Afrin’s water supply had been cut off for a week, following Turkish forces’ capture of a major water dam in the region.

Since the beginning of the Turkish assault on Afrin, more than 230 civilians, including 35 children, have been killed, plus 688 more wounded, according to the Kurdish Red Crescent.